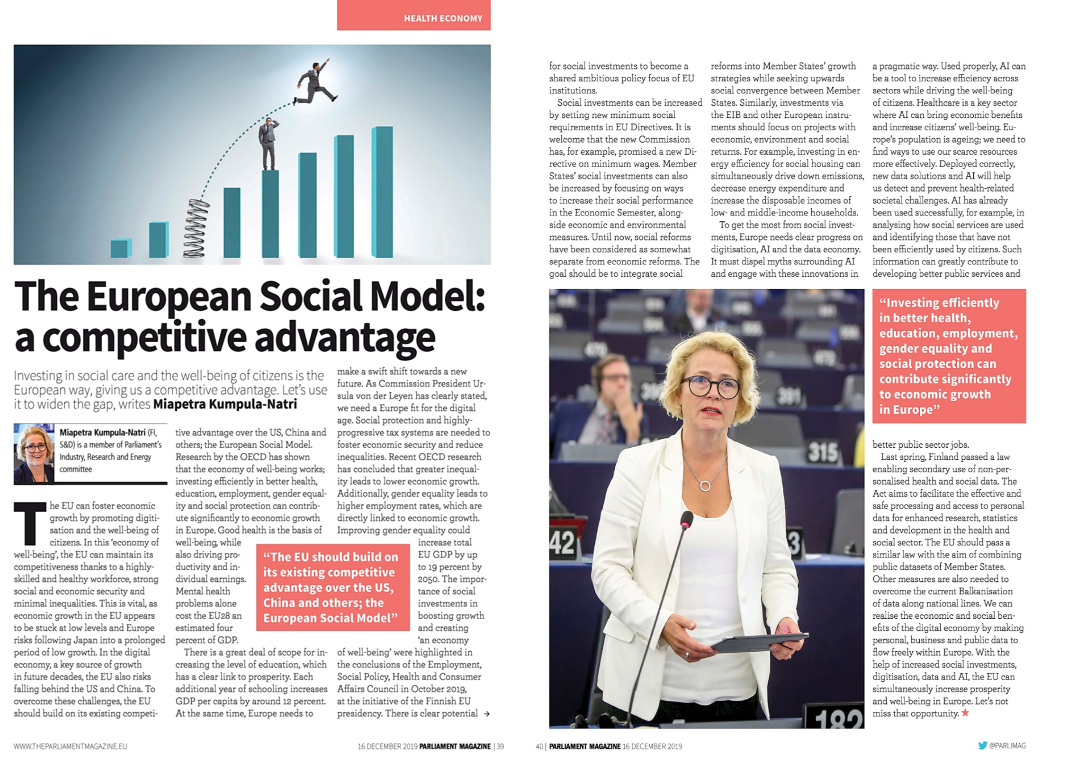 18 Dec Article in the Parliament Magazine: The European Social Model and AI – a competitive advantage

Posted at 10:31h in Yleinen by Marina Lampinen

The EU can foster economic growth by promoting digitalisation and the well-being of citizens. In this ‘economy of well-being’, the EU can maintain its competitiveness thanks to a highly competent and healthy workforce, strong social and economic security and few inequalities.

Economic growth in the EU appears stuck at low levels and Europe risks following Japan’s example into a long period of low growth. The EU also risks falling behind the US and China in the digital economy, the source of growth in future decades.

To overcome these challenges, the EU should build on the competitive advantage it has over the US, China and others: the European Social Model. Research by OECD has shown that the economy of well being works: investing efficiently in improved health, education, employment, gender equality and social protection can contribute significantly to economic growth in Europe.

Good health is the basis of well-being, while also driving productivity and individual earnings. Mental health problems alone cost the EU28 an estimated 4% of GDP.

There is a lot of scope for increasing the level of education, which has a clear link to prosperity. Each additional year of schooling increases GDP per capita by around 12%. At the same time, Europe needs to make a swift shift towards a new era. As von der Leyen has clearly stated: we need a Europe fit for the digital age.

The importance of social investments to boost growth, in order to create ‘an economy of well-being’, were highlighted in the conclusions of the Employment, Social Policy, Health and Consumer Affairs Council in October 2019, at the initiative of the Finnish EU presidency. There is clear potential for social investments to become a shared ambitious policy focus of EU institutions.

Social investments can be increased by setting new minimum social requirements in EU directives. It is welcome, that the new commission has, for instance, promised new directive on minimum wages. Member states’ social investments can also be increased by focusing on ways to increase their social performance in the Economic Semester, alongside economic and environmental measures. Up until now, social reforms have been considered rather separately from economic reforms. The goal should be integrate social reforms into Member States’ growth strategies while seeking upwards social convergence between Member States.

Similarly, investments via EIB and other European instruments should focus on projects with economic, environment and social returns. For instance, investing in the energy efficiency of social housing can simultaneously drive down emissions, decrease expenditure on energy and increase the disposable incomes of low and middle-income households.

To get the most out of social investments, Europe needs clear progress on digitalisation, AI and the data economy. Europe needs to dispel myths circulating around AI and to engage with these innovations in a pragmatic way. If AI is used properly, it can act as a tool to increase efficiency across sectors, while driving the well-being of citizens.

Health care is a key sector in which AI can bring about economic benefits and increase citizens’ well being. Europe is aging, and we need to find solutions to use our scarce resources more effectively. When used correctly, new data solutions and AI can help us detect and prevent health related societal challenges.

AI has already been successfully used, for example, in analysing the utilisation of social services, identifying where services have not been efficiently used by citizens. Such information can greatly contribute to the development of better public services and better public sector jobs.

Last spring Finland passed a law, which enables secondary use of non-personalized health and social data. The act aims at facilitating the effective and safe processing and access to personal data for enhanced research, statistics and development in the health and social sector. The EU should pass a similar law with the aim of combining public datasets of Member States.

Other measures too are needed to overcome the current balkanisation of data along national lines. We can realise the economic and social benefits of the digital economy by making personal, business and public data to flow freely within Europe

With the help of increased social investments, digitalisation, data and AI, the EU can simultaneously increase prosperity and well being in Europe. Let us not miss this opportunity.

This article is originally published in The Parliament Magazine on 16.12.2019.