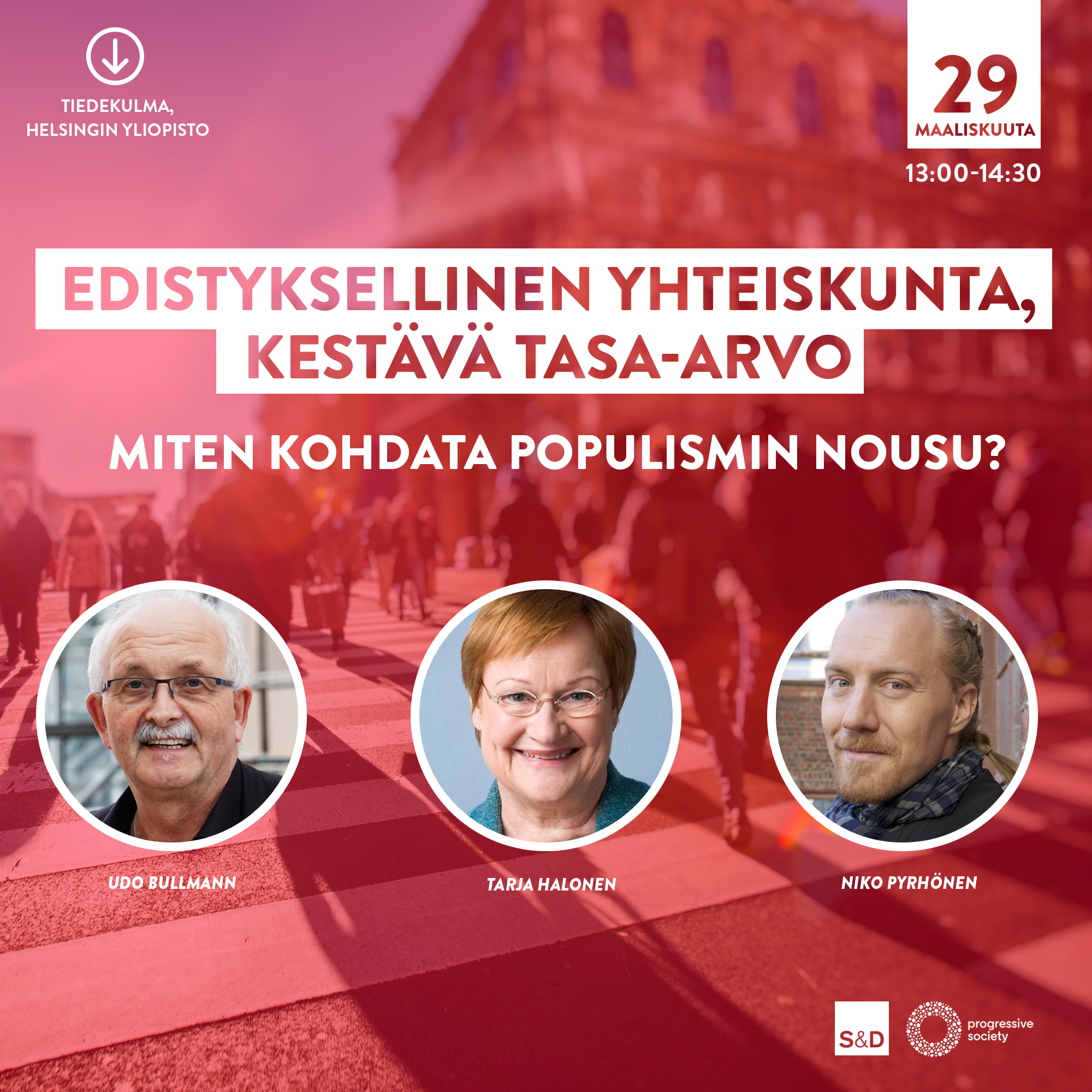 11 Apr The head of the Group of S&D in the European Parliament, Udo Bullmann, will be travelling to Helsinki

Posted at 13:22h in Yleinen by Marina Lampinen
The head of the Group of Socialists and Democrats (S&D) in the European Parliament, Udo Bullmann will be travelling to Helsinki, Finland, this Friday to attend the S&D Together event and the Congress of the Young European Socialists (YES), where a new leadership for the organisation will be elected. The Secretary-General of the organisation has since 2017 been Tuulia Pitkänen from Finland. Bullmann will discuss the report of the Independent Commission for Sustainable Equality (ICSE) and the rise of populism in Europe in a public debate with former President Tarja Halonen, which is open to all. Bullmann will also visit Vantaa with the Mayor of the city of Vantaa, Mrs. Ritva Viljanen, visit Kartanonkoski school and meet the leader of the Finnish Social Democratic Party, Mr. Antti Rinne. Ahead of the visit, S&D Group president Udo Bullmann said: “We are witnessing an extraordinary rise of awareness among young people over the urgent need to finally convert our outdated economic and social model into a more progressive, more equal and sustainable one. In this context, I am excited to travel to Helsinki to meet young and passionate activists in the framework of the Congress of the Young European Socialists and to discuss with them, as well as with other representatives of Finnish society, our vision for better Europe. “Inspired by the 2030 United Nations Sustainable Development Goals, we present a broad set of concrete proposals to change the course of the European Union towards a truly fair economic, social and environmental model that will achieve decent living conditions for the many, not just the few, while respecting the natural boundaries of our planet. We are convinced that this is also key in fighting the dreadful rhetoric and fake recipes of populists and nationalists. Knowing that Finland is considered a role model when it comes to ecological policies and equality, I am eager to exchange, to listen and to learn from the Finnish example.”  The S&D member and head of the Finnish delegation, Miapetra Kumpula-Natri, commented: “I am very delighted to welcome Mr. Udo Bullmann, one of the top leaders of the European Parliament, to Finland. “I am also delighted that the Young European Socialists hold their meeting in Helsinki, given that Finland will hold the Council Presidency from July onwards. We need a change towards a more sustainable society and place well-being of everyone at the heart of policy-making. Without change and well-being, we cannot fight against the climate change, which is the challenge of our century. However, it is important that the transition is just, otherwise we will lack support of the people and that will only lay ground for populist forces in Europe.” *Notes on the Programme: The ICSE-Report will be presented on Friday, March 29, from 13.00-14.30 in the public debate: “Progressive Society, Sustainable Equality: How to Fight the Rise of Populism”. The report was put together by a group of independent experts under the lead of former Greek minister of Labour and the Economy Louka Katseli and former PES-President and Prime Minister of Denmark Poul Nyrup Rasmussen and comprises more than 100 concrete proposals for the future of Europe. Panel: S&D Group leader Udo Bullmann; Mrs. President Tarja Halonen; Post-doctoral researcher from the University of Helsinki, Mr. Niko Pyrhönen; Moderator: Ms Maria Pettersson Place: Tiedekulma (Fönster), University of Helsinki, Yliopistonkatu 4, 00100 Helsinki At the S&D Together seminar which takes place between 15.30 and 18.00 at the fringes of the Congress of Young European Socialists, Udo Bullmann will intervene in the debate “Empowering Youth – Our role in the decision making process”, where Miapetra Kumpula-Natri, will give the opening speech. Place: Paasitorni, Paasivuorenkatu 5 A, 00530 Helsinki  —————————————————————————————————————————–