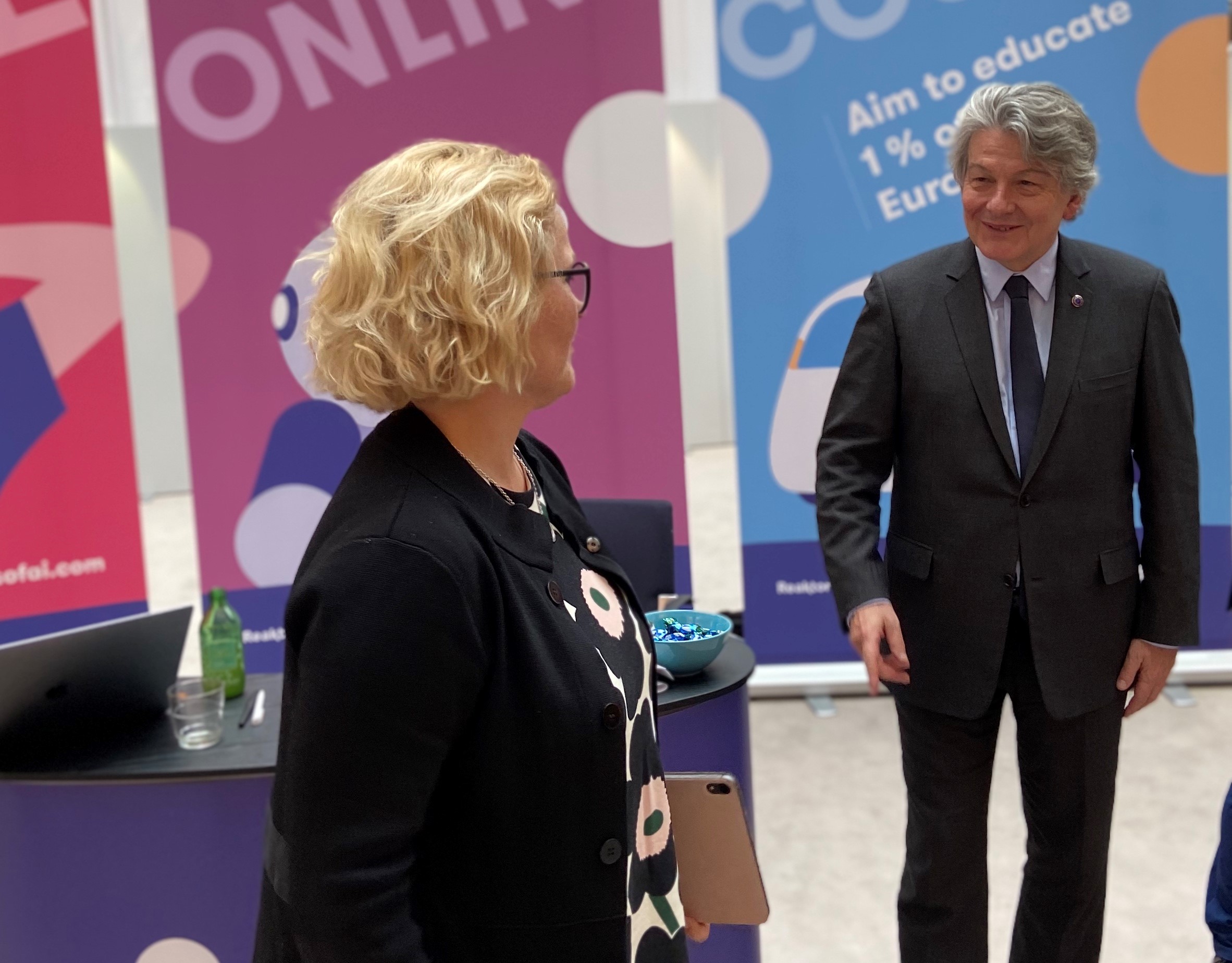 Posted at 17:11h in Yleinen by Marina Lampinen

I want to challenge all of you colleagues and readers, who have anything to do with AI and digitalization, to do this MOOC, free on-line course Elementsofai.com – will you?

We are witnessing an era of fourth industrial revolution – a digital one. Rapidly evolving technology, superfast connections such as 5G, massive amount of data it creates and artificial intelligence will re-shape the life and reality we know.

Who is this development benefitting?

We, the Socialists & Democrats, have a clear vision for the future. The digital revolution should neither leave anybody behind nor must lead to a ‘race to the bottom’ with regard to labour and social standards. Everybody must be included.

Digitalization must be seen as an enabler but with clear principles. We need more data and AI – we just need clear rules that is not concentrated in the hand of few. New massive amounts of data needs to be used more wisely: to find more efficient ways to fight climate change, increase productivity, energy and resource efficiency, fight unemployment, make better health care, traffic safety and safer societies . EU should aim towards digitalization that works for the people.

Human centric AI starts from users. So first, we need trust. We need to demystify AI. People tend to avoid, resist or even fear the development they do not fully understand. If we really want to make the best out of the digitalization’s benefits in Europe, people need to trust or understand the new tech.

“What is Elements of Ai?”

Education plays a key role. More or less the whole continent have been talking about digital skills and lifelong learning during recent years.

I had an honor to host an exhibition on ‘Elements of AI’ free online course in the European Parliament during the first week of February. Thank you visitors, who had talks with representatives of the University of Helsinki and Reactor, those who  created this great initiative.

Did you miss it? Don’t worry, just log in elementsofai.com

This all started as a course for the students in University of Helsinki, but then the paradigm changed: new aim was to educate the basics of Artificial Intelligence for 1 percent of Finnish citizens. The course boomed and the goal was reached in no time, we Finns are 5,5 millions.

Finland held the Presidency of the Council og he EU during the second half of 2019. Finland did not give any gifts during the presidency – expect one: Set the goal to offer the basic knowledge of AI to 1 % of European citizens!

So in December, inspired by the success of the online course, Finland decided to give an intangible gift to all EU citizens, a free-of-charge online course on artificial intelligence! In cooperation with the Commission, it will be available in all official EU languages. The translations are already done for English, Swedish, Germany and Estonian, and the rest will be finalized during 2020–2021.

Now as I am writing this, more than 350 000 people from over 160 countries have taken the course. Important fact to understand is that the course is not made only for professional or digi nerds but for common people: the aim is really to teach you the basics of AI, no matter what your age, gender or background is. What you need is a working internet and some good will.

The course is what I call digital education and lifelong learning par excellence. A concrete and easy-to-use initiative, that really has a multi functioning purpose: You can use it just to learn the basics of AI by your own from your bed during evenings, or as a part of education system in school, university or work. The Course is already a part of curricula in almost every Finnish university. I have learned also that some employers in Finland have advised their employees to take the course – just to keep up with the evolving world.

AI is really one of the hottest topics in Brussels at the moment. Here is so much talk about text analyzing, filtering etc… But do we all legislators actually know how it works?  Already after the chapter number three in Elements of AI, you will.

Finally, I would like to emphasize gender balance. AI learns from real life data and there is concrete risk that it will adopt and even make the real life unbalances more apparent. Coders and users needs to be diverse! E.g. How long have we talked about the small number of women in tech industry? I have been in politics from the 1990s (and by the way, also as a woman in tech industry as a graduated engineer from 1990s) and well, I can say that the topic is not new.

Concrete and equal possibilities make world more balanced. In the Nordics, the amount of women within the participants of the course is over 50%, and the rest of the world including the number of women participating is over 40 %! That is more than 3 times higher than the average amount of women working with tech. And it gets even better: After the course had been up and running in Finland for a while, the number of women applying to study computer science in the home university of the course, Uni Helsinki, increased by 80 %. Wow!

I really want to thank the people behind the Elements of AI online course. We need much more this kind of concrete initiatives in Europe, let’s be inspired by this. And last but not least, spread the world of the course around your block. I want to see, how quickly we can achieve the goal of educating the basics of AI for 1% of European citizens! I think we can reach it!

The text is originally puplished in The Parliament Magazine on 3.2.2020.